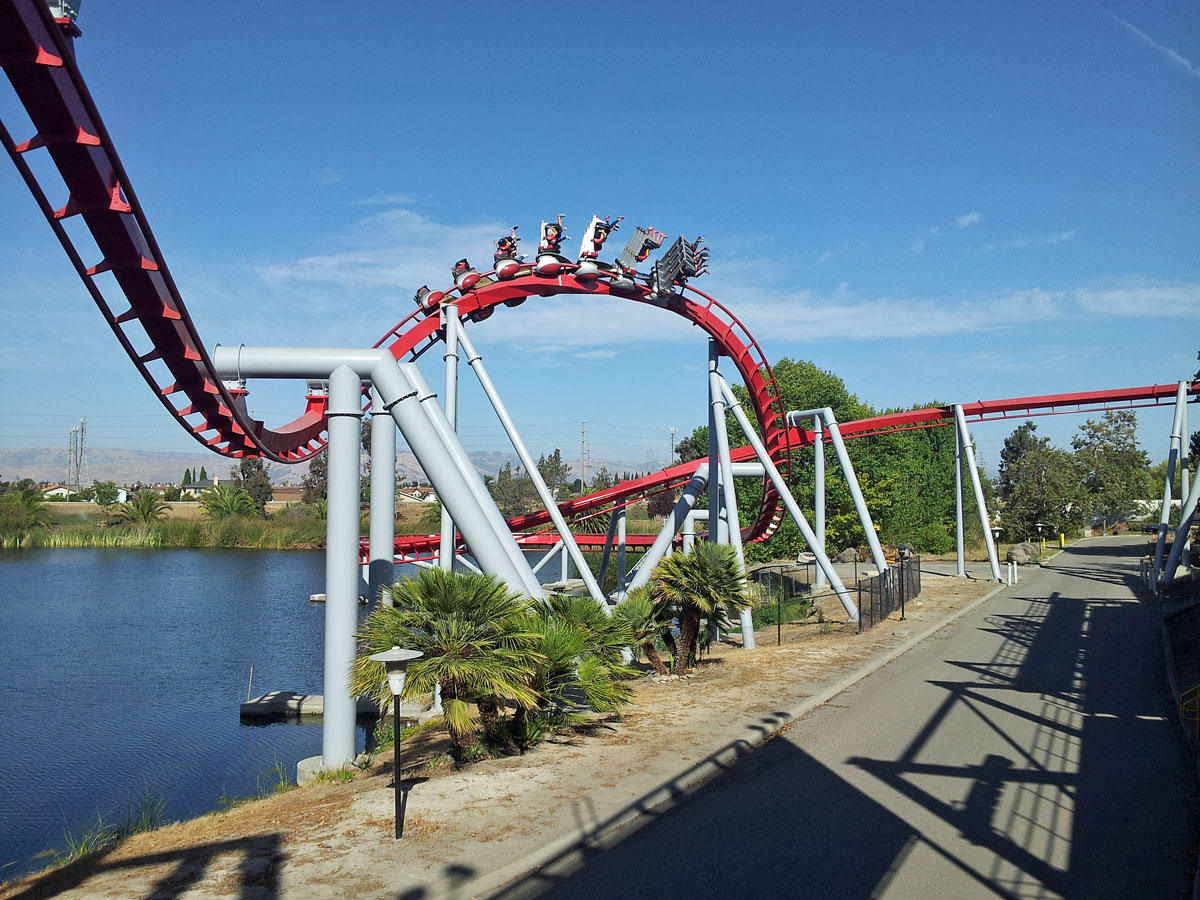 An inverted roller coaster is a roller coaster in which the train runs under the track with the seats directly attached to the wheel carriage. This latter attribute is what sets it apart from the older suspended coaster, which runs under the track, but swings via a pivoting bar attached to the wheel carriage.
The inverted coaster was pioneered by the Swiss roller coaster designers Bolliger & Mabillard in the early 1990s. The first installation came at Six Flags Great America in 1992 Batman: The Ride opened to much fanfare and was “cloned” many times at other parks. The inverted coaster quickly became an industry favorite with custom designs installed nearly every year.
Because of this succes also other rollercoaster constructors started building their version of the inverted rollercoaster.

In 1993 quickly followed the second and third installation of a B&M Inverted coaster.
The second was Top Gun at Paramount’s Great America and the third was a clone of Batman The Ride at Six Flags Great Adventure. 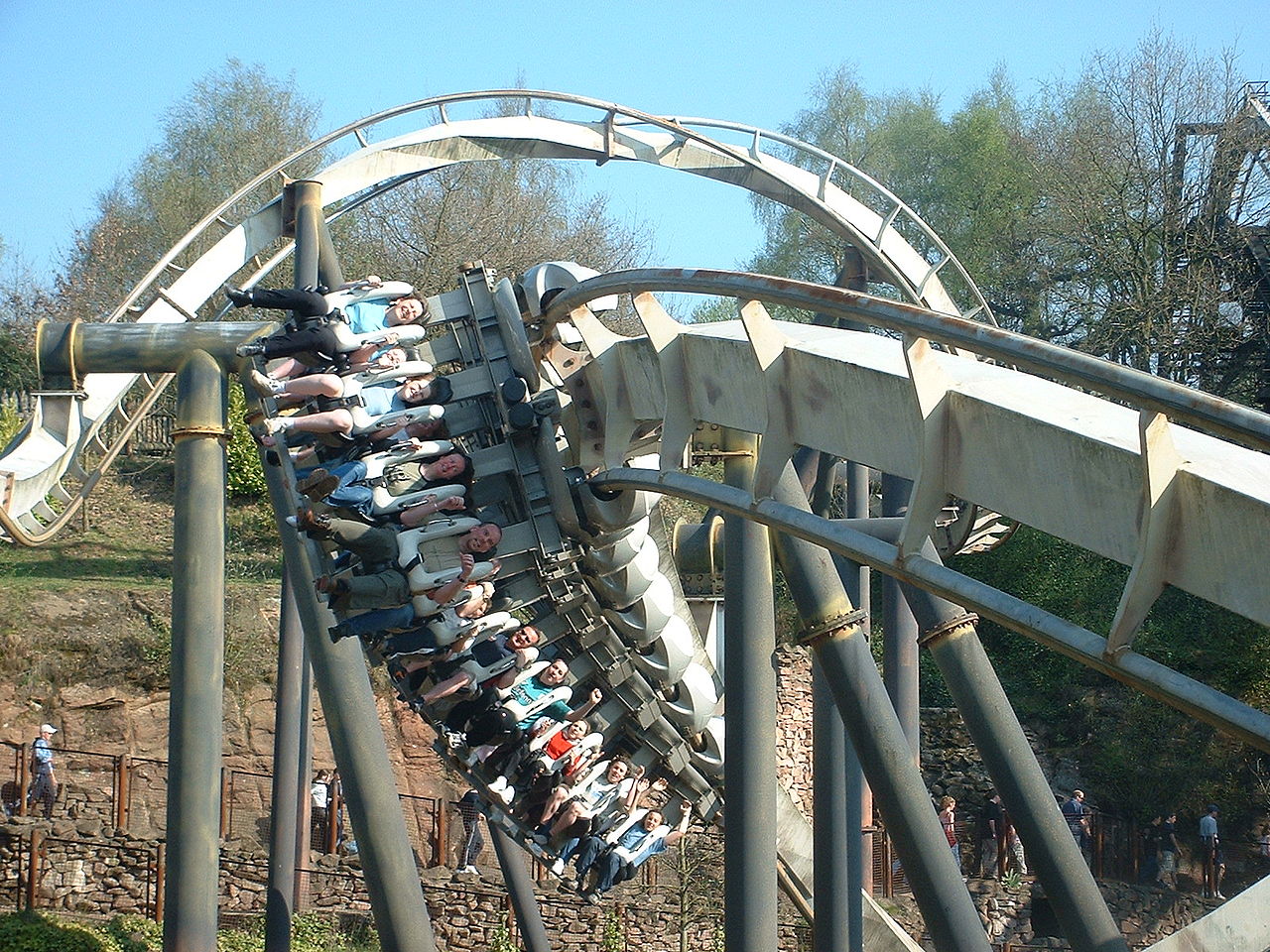 Already before the opening of  Batman The Ride at Six Flags Great America in 1992, ride designer John Wardley became interrested in this ride concept that he wanted to have this type of rollercoaster at the Alton Towers themepark in the United Kingdom, because other proposed prototype rollercoasters for his choice location were not going as expected because of the height restriction imposed on the park.

Development of the ride concept and the proposed area started after Wardley returned to the UK. The name Nemesis and the theming concept about an alien creature trapped beneath the park were devised to match the location of the coaster.
The layout for the ride is exciting for both riders and non-riders; for example, the final inversion was built at the eye level of an observer.
After 20 years Nemesis is still a fan-favorite. 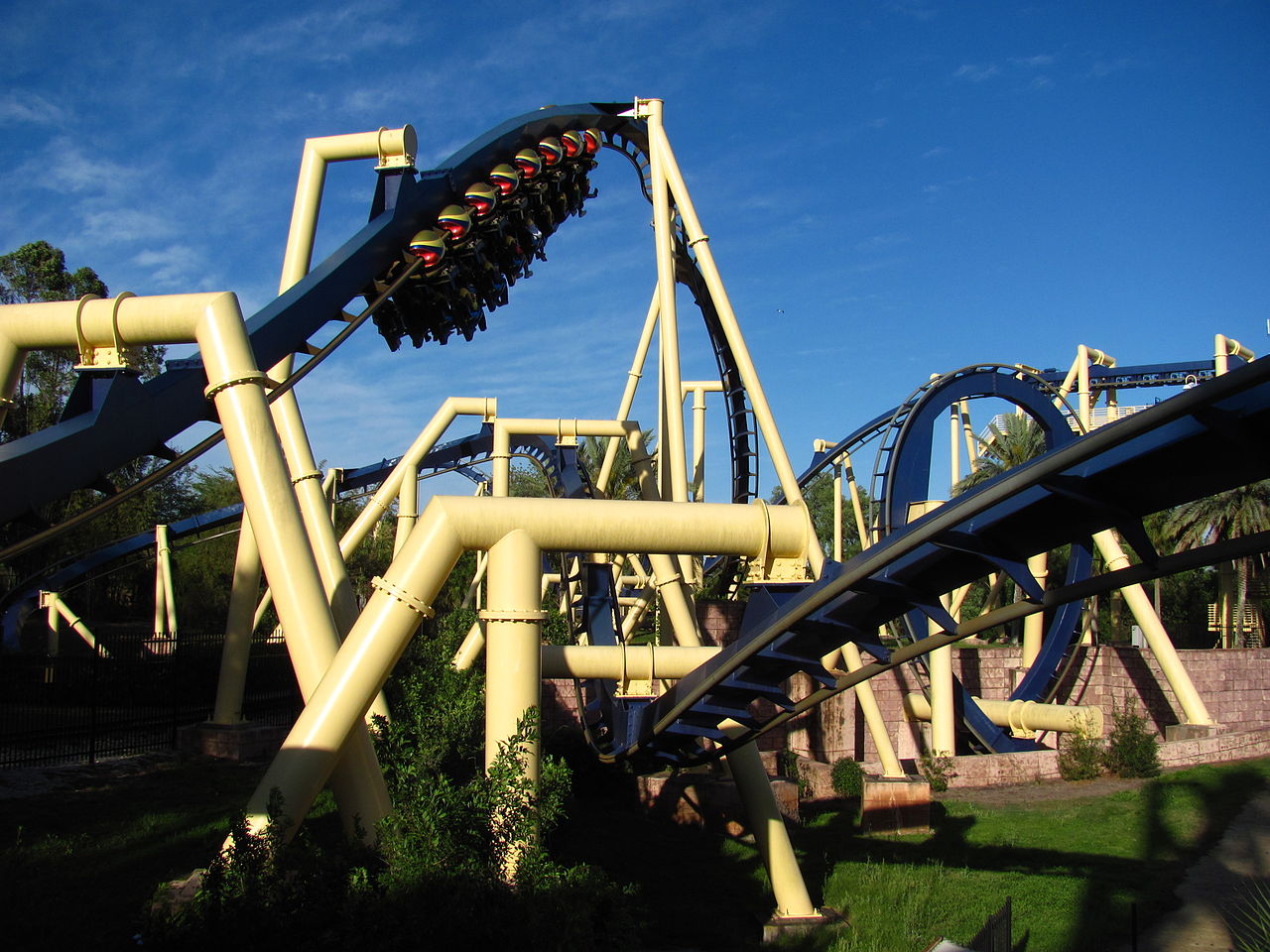 Year after year, the inverted coasters became taller, faster longer and got more inversions.
In 1994 Raptor at Cedar Point was the coaster to beat, quickly surpassed by Montu at Busch Gardens Tampa in 1996.
In 1997 all these records went to Alpengeist at Busch Gardens Williamsburg, except the record for number of inversions. Alpengeist only got 6 inversions were Montu has 7. In 1999 Dueling Dragons opened at the new Universal Islands of Adventure themepark in Orlando. Dueling Dragons is the first and only pair of dueling inverted rollercoasters.
The ride is themed to two chasing dragons, one side being Fire Dragon (red) and the other Ice Dragon (blue).
It features a layout in which the two trains share adjacent lift hills but then traverse two unique courses. When Islands of Adventure opened on May 28, 1999, the ride was called Dueling Dragons and was located in The Lost Continent area with the two sides named Fire and Ice. During much of the ride’s history, the trains were dispatched simultaneously, providing three near-miss encounters along the courses. However, after two injuries related to loose objects hitting riders on the other coaster, the roller coasters are now dispatched separately. 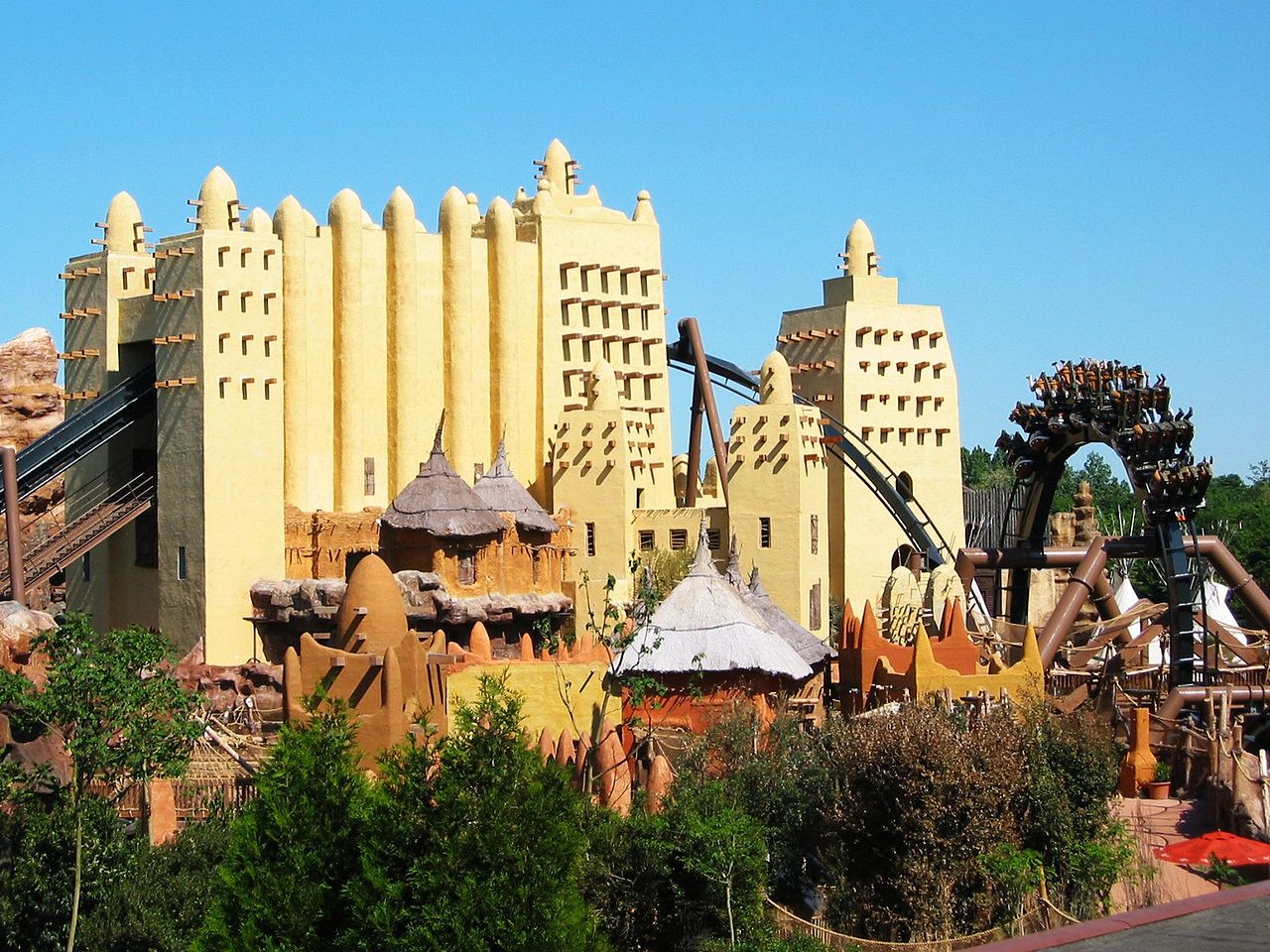 One of the most impressive themed inverted rollercoasters opened on 24 May 2006 in Phantasialand in Germany. Black Mamba is themed after the african snake with the same name and is located in the Deep In Africa area of the park.
Theming in the area largely draws from the mud architecture of Western Africa, especially the cities of Timbuktu and Djenne.
The ride travels through ravines and tunnels, similar to the snake and Nemesis at Alton Towers.
During the ride, forces are created of up to 4.0G. In ten places the guests experience so-called “Near Misses”, where the course passes near the walls giving the impression of an impending collision.
Also Black Mamba features a helix with the smallest radius ever built on a B&M rollercoaster. 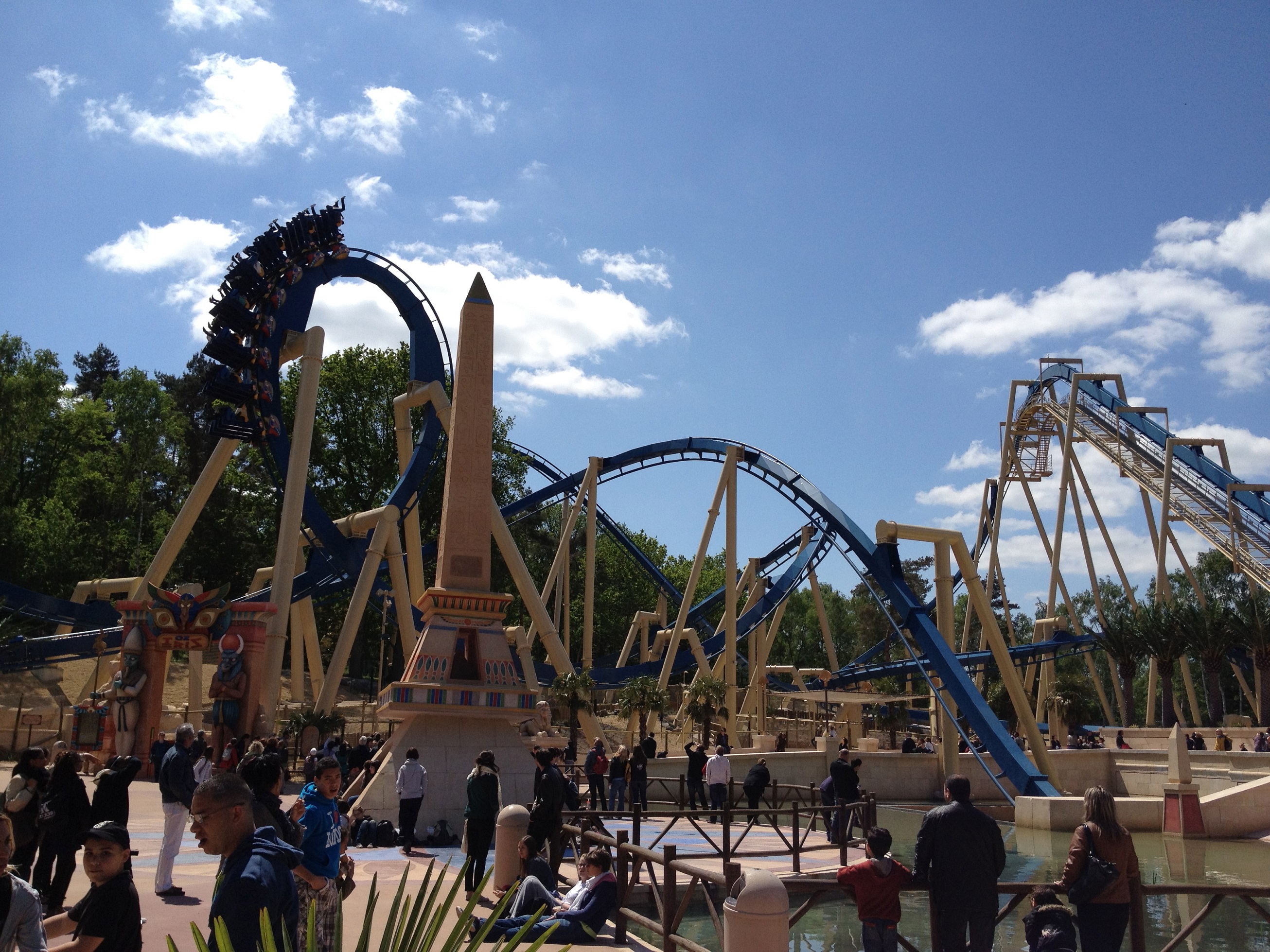 One of the last opened Inverted coasters is Oziris at Parc Asterix in France, which opened on 7 april 2012.
OzIris is part of a new egyptian themed zone inspired by one of the Asterix comic book series Asterix and Cleopatra (as well as the movie The Twelve Tasks of Asterix) which expanded the park by ten percent. With exotic plants, palm trees, rocks, lake, Egyptian monuments and a huge temple, the new area combines the characteristic of the Asterix cartoon with this custom design roller coaster.